Beauty Zoya PixieDust Is Quite Possibly the Coolest Polish Ever

Zoya PixieDust Is Quite Possibly the Coolest Polish Ever 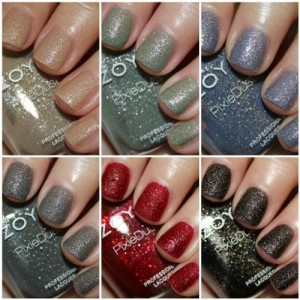 I saw a sneak preview of the Zoya PixieDust nail polish a little while ago, at least a month or two before it hit the shelves in the stores. I wasnt exactly sure of when it was coming out, so I checked for it every time I went to Ulta.

It just came out at the beginning of April and I was finally able to pick one up. I got Vespa because it was the closest to the mint green shade Ive been wanting anyway. This is a pale sage, with a slight gray tinge. Its listed as a cool, neutral green.

What makes this polish so interesting is the matte finish combined with micro-glitter. There are others on the market, but none of them have combined this amount of glitter or looked completely matte while the glitter remained clear and bright (none that Ive tried, at least).

I applied three coats, though I probably could have gotten by with just two. It felt gritty with every coat, which took some getting used to, and I felt like I had to use more polish to paint each nail because the glitter would drag across and disrupt the surface.

It doesnt look streaky at all now; in fact, its almost opaque. Despite the three coats, this polish dried quickly. I was typing within about 10 minutes of applying it. With other similar polishes, Ive had smudges happen even after about 30 minutes.

The finish is gorgeous and I think its great for mommy-daughter manicures and pedicures.

The only color I can really review is Vespa, but I had a hard time deciding between colors. Theyre all beautiful, and some are colors you dont see often (like this one and the muted, dusty blue) while others are classics with a twist (like the red).