Toys Zoomer Is Almost as Cute as a Real Puppy

Zoomer Is Almost as Cute as a Real Puppy 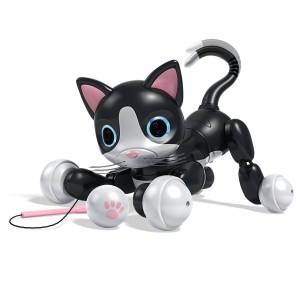 I’m not a fan of real puppies, but Zoomer is adorable. He can be trained to lay down, speak, sit, roll over, and play dead just like a real puppy, but he doesn’t poop, pee, or shed all over the furniture. That makes him a winner in my book!

Zoomer is appropriate for children ages 5 and up. However, since you have to train Zoomer to do tricks, I think he might be frustrating for younger children. My son would get the concept of training a dog now that he’s almost 9. But, when he was 5 or 6, he would have expected Zoomer to do everything you see in the commercials fresh out of the box.

Zoomer can understand English, French, and Spanish. For older kids, I think it would be fun to practice French or Spanish vocabulary words by teaching Zoomer tricks in another language.

Zoomer needs to be recharged by using the included USB cable. I’m not a huge fan of toys that need to be recharged this way, since I normally have a ton of other gadgets plugged into my USB ports. But, I suppose this method is preferable to having to constantly replace his batteries.

What do you think of Zoomer? Would this be a toy you’d consider buying for your kids?