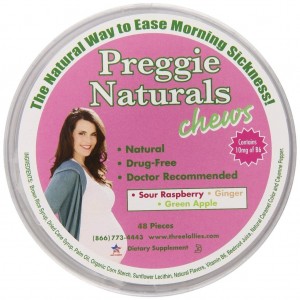 As far as I’m concerned, morning sickness is the worst part of pregnancy. My morning sickness lasted pretty much all day into the middle of my second trimester, so I wasn’t really feeling that pregnancy “glow” you hear so much about.

If you’re expecting and struggling with morning sickness, it might be worth checking out Preggie Naturals Chews. This is a new product from the makers of Preggie Pops, lollipops made with essential oils and natural ingredients designed to fight nausea, such as peppermint, papaya, green tea with lemon, and ginger.

I haven’t personally tried the Preggie Naturals Chews, since it’s been almost 10 years since I was last pregnant. But, I do think many remedies with essential oils can be just as effective as modern medications. They’re also a lot less risky when you’re pregnant, since it seems like we’re always finding out about dangerous side effects of prescription medications.

You can purchase Preggie Naturals Chews on Amazon. If you’re all done having kids, keep in mind that Three Lollies also makes products designed to treat general nausea and motion sickness as well as natural lollipops for people who are trying to quit smoking.

If you’ve tried Preggie Pops or Preggie Naturals Chews, I’d love to hear what you think!