Linea nigra, also known as the pregnancy line, is a dark line that appears across the belly. The line typically runs from the navel to the pubic area. There is a probability that the line existed before but unnoticeable because of its light color.

The light line that exists before pregnancy is called Linea Alba (white line) but it darkens after pregnancy hence the name linea nigra which can be loosely translated to mean black line. Nonetheless, the pregnancy line is not black per se but rather brownish and darker in color. 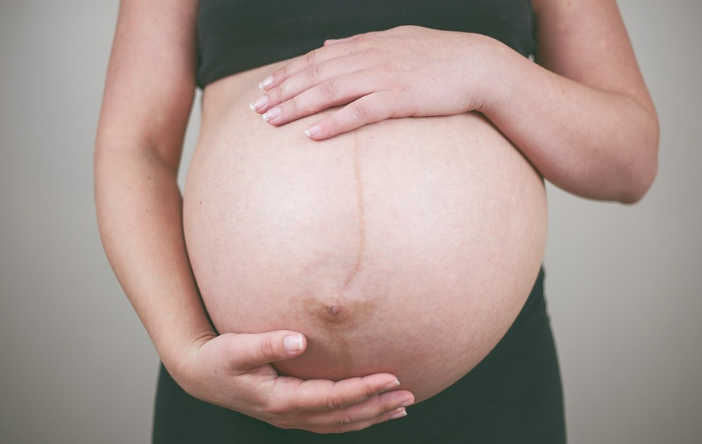 Line nigra is characteristically ¼ to ½ inch wide and becomes darker as the pregnancy develops.

What Causes Linea Nigra During Pregnancy?

It is not uncommon for the skin color to change during pregnancy. In fact, it becomes darker as the weeks pass by. While the particular cause of linea nigra is unknown, it is thought to be a result of a hormonal imbalance that occurs throughout the pregnancy period. Some quarters suggest that the melanocyte-stimulating hormone (the same hormone that triggers the creation of melanin) produced during pregnancy is the primary cause of linea nigra. The same hormone is believed to cause darkening around the nipples.

When Does Linea Nigra Appear During Pregnancy?

In most cases, linea nigra starts to become visible during the first or second semester. However, it might appear early during the first semester particularly if the mother is expecting triplets or twins. It is important to note that not every expectant mother gets linea nigra. According to research, linea nigra occurs in up to 75% of all pregnant women.

Note that it doesn’t really mean anything if linea nigra doesn’t disappear. Ideally, the way the body reacts to higher levels of melanin and estrogen varies from one woman to the other and doesn’t necessarily a sign of anything wrong.

When Does Linea Nigra Disappear?

In most instances, the dark line will disappear after a couple of weeks following giving birth. However, in some women, it can last up to a few months. It takes roughly 12 months for linea nigra to disappear completely.

How to Remove Linea Nigra During Pregnancy?

The occurrence of linea nigra is natural. In essence, this means that little can be done to remove or prevent it from occurring. Nonetheless, there are some steps that you can take to lessen the intensity of darkening including;
• Wearing clothes that cover the belly. Apart from ensuring that the baby gets adequate amounts of warmth, such clothes will also protect the belly from the sunlight.
• Whenever possible apply a sunscreen lotion on the belly to reduce the damage caused by direct sunlight. Be sure to use cream(s) with a Sunscreen Protection Factor (SPF) of 15.
• Check what goes through your mouth. It is advisable to eat foods rich in Folic Acid such as oranges, wheat, spinach, and beans as well as asparagus.
• Use a natural method to reduce the pigmentation such as applying lemon juice or alcohol on the belly.

If you are pregnant, the chances are that you belong to the 75% of women who will get linea nigra. As mentioned above, the line is “normal” and should not be a cause for alarm. If it occurs, just know that it will not affect your pregnancy in any way.

As a matter of fact, you should concentrate on other aspects of your pregnancy such as eating well and attending clinics as per you care provider’s schedule. After all, there is very little (almost nothing) you can do about linea nigra irrespective of the degree of pigmentation