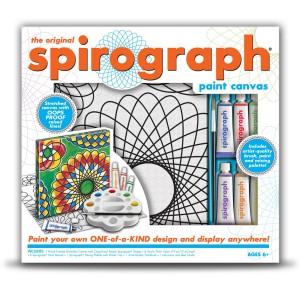 Over the years, the Spirograph has inspired millions of young artists to develop their creativity. This paint your own canvas kit from Kahootz Toys takes the appeal of the Spirograph one step further by letting your child paint a canvas with a Spirograph inspired pattern.

A brush, paint, and mixing palette are also included, although I imagine that you might need extra paint to complete all of the projects. I know when my son tries mixing paint, we end up with a lot of rejected colors in his quest for the perfect shade of blue or red!

I like this craft kit because I know many children have trouble making detailed designs using the Spirograph. The Spirograph was one of my favorite toys as a kid, but it took lots of practice for me to be able to create the sorts of intricate designs I wanted.

I recently purchased a Spirograph for my nine-year-old son and found that he also struggles with the patience and fine motor skills needed to turn his ideas into actual artwork. I think he’d love being able to paint a Spirograph inspired canvas to hang in his room or give as a gift. I know his grandparents would love to be able to display something like this in their home!

You can purchase the Spirograph paint your own canvas set on Amazon. It’s recommended for children ages six and up.