If you’re a new parent, nothing means more to you than making sure your baby is safe at night. An audio baby monitor allows parents to listen to their babies when they’re in another room. Knowing whether a baby is sleeping, awake, content or unhappy can give a parent peace of mind. An audio monitor can be used when the baby is sleeping at night, during naps or when an infant is playing in the crib. Here are our picks for the best audio baby monitors. 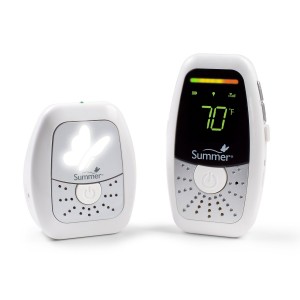 Summer Infant Baby Wave picks up almost every noise so that parents can hear the baby breathing, moving, fussing or crying. Background noises are filtered out so that you can hone in on only the sounds that your baby is making. The volume knob lets you make the monitor as loud as you need, which is helpful when you’re vacuuming or washing dishes.

A series of LED lights are also activated when there are sounds on the receiving end of the monitor. These lights allow you to view when there’s noise on the other end. If you’re in a noisy room, in the shower or out of hearing range from the baby monitor, you can still monitor your baby. The LED lights also come in handy at night. It’s hard to sleep when the monitor next to you is projecting every sound your baby makes. Turning the volume down will help you stay asleep unless your baby is extremely fussy. You’ll still be able to sense sounds by looking at the lights.

Since it utilizes digital technology, the Baby Wave monitor provides a secure connection. Your neighbor’s baby monitor won’t be able to pick up the signal from yours, and the signal is encrypted so that it can’t be accessed from other devices on the same frequency. The baby monitor uses a 2.4 GHz signal that shouldn’t interfere with your cordless phone or wireless router, although some users report experiencing interference with certain devices.

This baby monitor has a long range, giving you freedom to move around the entire house. The unit that goes in the baby’s room must be plugged in at all times, but the other unit is lightweight, portable and has a rechargeable battery. An indicator lets you know when the battery is low so that you can plug it in.

The Baby Wave monitor isn’t an advanced baby monitor and doesn’t have a video option, but it’s a satisfactory basic model that lets you keep track of your baby when you can’t be in the room with him or her. It’s affordable, making it a great option to give to the grandparents or the babysitter. 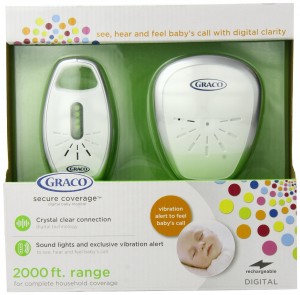 These days, many parents have audio baby monitors for their peace of mind. Graco’s Secure Coverage Digital Baby Monitor is an excellent choice, as long as you’re willing to plunk down the money for a brand-new—not used—system.

The Graco system comes with a parent unit and a baby monitor and retails for just under $40 on Amazon.com. Unlike some monitors, the Graco operates on the 900MHz frequency; this means no interference from cordless phones or microwaves. Both units have AC adapters, although the parent unit is rechargeable.

The company estimates that the wireless connection range is 2000 feet, although very few reviewers have tried it at that length. Real-world use, as always, depends upon your surroundings. It has a vibration mode and a belt clip for the parent unit so you can take it with you. It doesn’t have two-way communication.

Recent reviewers raved about the sound quality; one buyer wrote, “You can’t go wrong with this – it works great, very reliable, and has good distance…Forget the fancy expensive things, just go with the tried and true.”

The sound quality and reliability praise was echoed across almost all buyers. One used his unit to monitor his chicken coop, while another noted the excellent sound even after accidentally misting the unit with spray paint.

One of the problems endemic to buying things online is that you can’t inspect them before buying them. For many buyers of the 2010-11 versions, the battery life was way too short and the wireless connection between the two units kept dropping out. Frustrated users noted the rechargeable batteries only lasted about a year.

It looks like Graco took the criticism to heart, because reviews have improved immensely since 2012. The main complaints now are about hearing too much sound; not only can children be heard, but so can any breezes and even outside disturbances. Whether hearing too much from your child’s bedroom is a bad thing is up to the individual parent.

Reviews on this product are generally excellent for the most recent model, but for the ones sold around 2010-11 opinion is decidedly mixed. Graco appears to have fixed the problem of the units losing wireless connection and terrible battery life, so the Graco Secure Coverage Digital Baby Monitor is a good choice as long as you’re buying it new with a warranty. Leave the used ones alone. 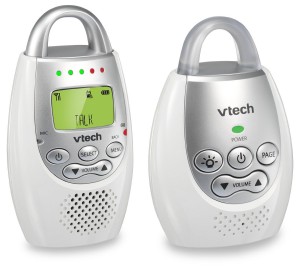 The VTech DM221 uses DECT 6.0 wireless technology, the same as a typical cordless house phone. There are two parts to the system: a slightly larger parent unit and the child’s unit. Both units look somewhat like padlocks, with an oval-shaped body and a large loop on the top.

The wireless range is estimated to be 1000 feet, although range depends on your house and how many walls are between the units. The VM221 has two-way communication, meaning you can talk to your child through the unit; the parent unit also has five volume settings and a vibration mode that works the same as your cell phone’s vibration mode. The parent unit has rechargeable batteries, but the child’s unit must be plugged in.

Reviewers praised the sound quality of the monitors as well as how sensitive the microphone was. As an Amazon reviewer said, “I’ve used other baby units before, but I’ve found that this particular unit is awesome!…The thing I love the most is that you don’t hear air all night long. If it’s quiet in the room no sound comes through, if it’s loud you hear it perfect.”

Many also appreciated the ability to talk to their baby through the unit, noting that it’s good for keeping track of older children as well. The DM221 child’s unit also has a night light feature that parents liked, and the ability to shut it off as well.

There were a number of complaints about the two units losing their wireless connection occasionally. The connection would reestablish itself after a minute or so, but the 1000-foot range is only a best-case scenario. Making sure your two units have as clear a line of sight as possible is key.

Others were unhappy about the parent unit’s battery life. One Amazon reviewer wrote, “Super sensitive and clear sound. This is great; just wish the battery life was better.” That was echoed throughout most of the reviews.

For just under $40, the VTech DM221 is an excellent buy, but it needs to be kept away from cordless phones due to interference. You should also remember to charge the batteries the first time for the recommended time as well, but for the price it’s hard to find better.