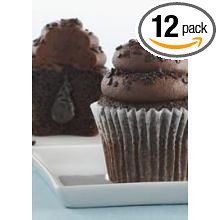 Ive been disappointed too many times over the years by the things that came out of the Walmart and Kroger bakeries. Im sure there are some fantastic desserts in those stores somewhere, but I just havent found them.

I was in my monthly I need chocolate rage that my husband recognized before I did, and he scampered out the door just as Publix was about to close. He didnt make it in time, so he had to go to Kroger.

What he picked up wasnt actually made there, but that didnt really make me feel much better, since most of the desserts Ive purchased in stores that werent made in their bakeries were stale and tasteless, hardly worth trying to cure a rage with, and likely to make me even madder when the plans failed.

He got the Kimberleys Bakeshoppe Triple Chocolate Cupcakes and I kind of wish they didnt come in four-packsbecause Im likely to eat them all.

Theyre absolutely decadent and not dry at all. The frosting on top is thick and creamy, not just half-hearted fluffy swirls of sugar that hurts your teeth. Theres some substance there. The cake itself, while moist, is nothing to flip out over until you bite into the fudge. The fudge wasnt just a blob in the center; its almost as if it were injected all throughout the cake to add extra richness and flavor.

If I didnt know better, Id have thought these came from a local gourmet cupcake shop. Im not sure if theyre sold in stores other than Walmart and Kroger, but if you see the chocolate or red velvet ones (my mom had some of those), grab them. You wont be disappointed.