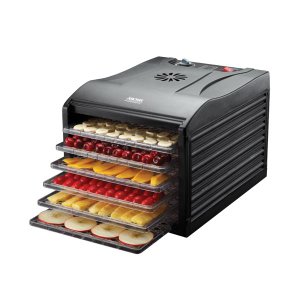 This dehydrator doesn’t have the sleekest of designs. It is a similar to a large toaster in size, and has an opening where you place your food on the trays to let them dry. As a side note, there are six trays, so you can dry a good bit of food at once.

It also has a drip pan at the bottom to remove the water after the food has been dehydrated, which is a big plus. It weighs 11.7 pounds, so it is definitely an investment in terms of space.

Speaking of investment, this dehydrator is currently being sold for $129.89 on Amazon. This is pretty middle of the road; it isn’t crazy expensive, but most people can’t just buy it on a whim, either. It certainly comes with all of the essentials; it has an internal fan to allow for even drying, and a thermostat that ranges from 95 to 155 degrees Fahrenheit.

I was initially surprised at how big this unit was! If you’ve read above then you know what to expect, but I hadn’t realized the scale it was built on. Some would say it’s clunky, which is fair, but this also means that it can hold a lot of food at once, so I’m not complaining!

I got it set up right away and didn’t have any issues. It comes with an owner’s manual that also says how long you can expect to wait on certain kinds of food, which is a nice touch. Once it was all set up, the only thing left to do was give it a whirl!

One disconcerting thing that I noticed was the smell of burning plastic when I first turned on this unit. It lasted for about five minutes and hasn’t been an issue since then, so I’m willing to let it go, but it’s something to be aware of.

I decided to start out with something easy; veggies! I put in some spinach and kale and gave it three hours to dry them. When I opened it up, voila! Perfectly dehydrated and all of the residue had landed in the drip pan at the bottom. I wiped down the trays and while I wouldn’t say they are particularly easy to clean them, it certainly isn’t a big chore.

After I cleaned my trays, I moved on to something a bit bigger. I spread out about a pound of beef jerky on some parchment paper and let the dehydrator do its thing. I came back to it eight hours later, a pretty normal time for that amount of meat, and it was perfect! Totally dried and ready to be stored. Cleanup was just as easy with meat, almost all of the residue ended up in the drip pan.

I have to give this product two big thumbs up! It has been dependable and has yet to let me down with any task. Everything I put in dries easily and I don’t have to worry about it not drying evenly because of the internal fan.

If I had one complaint, it would be that it’s hard to check on the food once it’s in there without opening the door, which obviously lets the heat out. That is far from a big deal, though, and it’s how most dehydrators work anyway.

Overall this was an amazing product, and I don’t have much negative to say about it. The Aroma Professional Dehydrator gets 4.5 stars out of 5 from me!